AMM Round 1 In Review: Stats & Trends

In total, AMM had:

Here are the results in pie chart form: 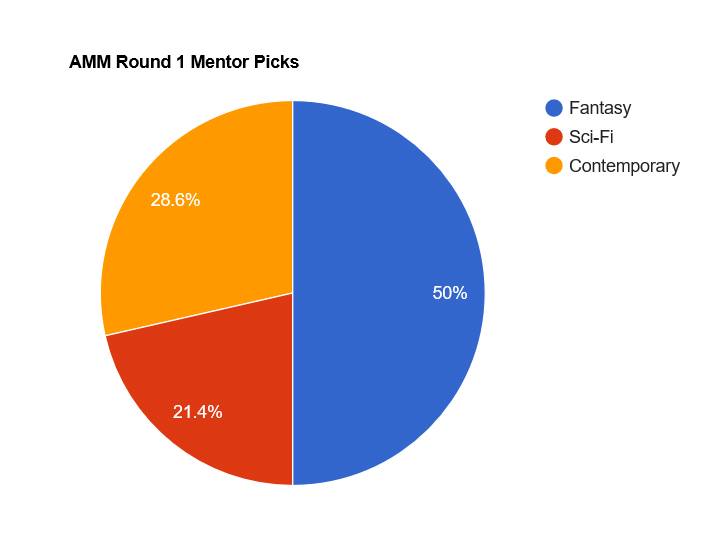 Parsing this, the biggest takeaway: a lot of people are writing fantasy, and a lot of our mentors were drawn to it. As many of our contemporary and fantasy mentors straddled the line–asking for subs in both genres–that may account for the lower percentage of contemporary picks. Sci-fi performed right on par, statistically with the percentage of those subs.

Bearing this in mind, we do plan on bringing in some mentors strictly interested in contemporary, as that is clearly a very popular submission category.

Some overall observations on the queries submitted to us, bearing in mind we weren’t expecting perfect queries! But we hope these tips/tricks will help everyone in crafting/polishing those queries in future.

The #1 question agents will ask themselves while reading your query:

“Why should I care?” A lot of the queries submitted had us asking this question. Your query is not a play-by-play of your plot: you should be introducing your main character, what conflict they’re facing, what the stakes are and why the reader should care. Don’t say it! That’s your stakes. And if you’ve drawn your character well and laid out the conflict aptly, the agent will be able to answer that question.

Also: beware using outliers or super popular titles as comps. One: how many “the next Gone Girl/Hunger Games/The Fault in our Stars” have we all seen already? These books are super successful and exist almost in a world of their own. Two: It doesn’t inspire confidence about how well you know the market you’re writing for. Those books mentioned above are known by readers and non-readers alike; you can see them while you’re picking up bread and milk. Show how much you know by using less well-known titles in a more targeted style. An agent/reader will be more drawn in by this than you saying you’ve got the next million-selling hot thing. Because you most likely haven’t.

Always check the title you’ve chosen for your book before querying it! In many cases, titles we saw were identical to books released in the last 4-5 years, and in some cases titles were too close (or identical) to an existing TV show, movie or song, where there might be confusion, or simply that the similarity might be too jarring to the agent/reader. Always think whether you want the reader to sing the hook from a song every time they look at your title!

You can search Goodreads or Amazon to see if a book has the same or similar title. While it’s most important not to have duplication within your genre (ie: YA books vs. adult), if there is an adult/other genre book that has been published recently and has significant traction, a repeat of the title might not be wise. While titles change ALL THE TIME in publishing, by using a title that is identical to a book already out in the market, you’re tipping the agent off to the fact that you may not be as well-versed in the publishing industry as they’d like.

On a related note, think about marketing categories when choosing a title. A YA novel with a title that sounds like middle grade is going to color the agent’s reaction–they may go into your query/pages assuming your YA book is more juvenile than it is.

Some overall trends we saw:

Of course everyone has to start somewhere! While many first books can be and are published, authors who make it with their first novel are in the minority. For most, a first book is a place to start; the book that teaches you how to write a book. Many of our mentors took on mentees on their first book, but in the case of many submissions, the writing wasn’t quite polished enough; the plotting wasn’t quite there. You learn by writing & working, so if you submitted your first project and weren’t chosen, we recommend revising it–dig in and make real changes! Work on polishing with a focus on strengthening character arcs, cutting down on info-dumping and repetition, showing instead of telling. And, most importantly, work on a new book. Every book you write teaches you something new about writing books. You may find by working on a new project that you figure out what to do with the old one.

We saw a lot of manuscripts with dual point-of-view or multi-POV (3+ characters), and in many cases, the additional POVs were hard to justify. If you’re getting nebulous feedback or query rejections and you have multiple POVs, consider each of them and what purpose they serve. Are each of the POV characters as well drawn as the others? What purpose do they serve–could you tell the story as well, if differently, if you cut it down to just one? Or two (if more than two)? Does each character’s opening chapter pack the same punch as the first? Very often, the first POV we read was the strongest–the character and voice jumped off the page, there wasn’t too much info dumping or navel-gazing. Second/third POVs couldn’t live up to the first. Sometimes that means a rewrite. Other times, it may mean dropping multi-POV and doing a big revision. Our advice to those writing dual/multi-POV is to be open to changing it–either rewriting/strengthening the weaker character’s POV, or dropping it.

But there’s more! Our mentors had lots of thoughts on micro-trends within genre submissions, which we’ll share in a separate post. We’ll also be posting about ownvoices and writing diversely, so stay tuned!